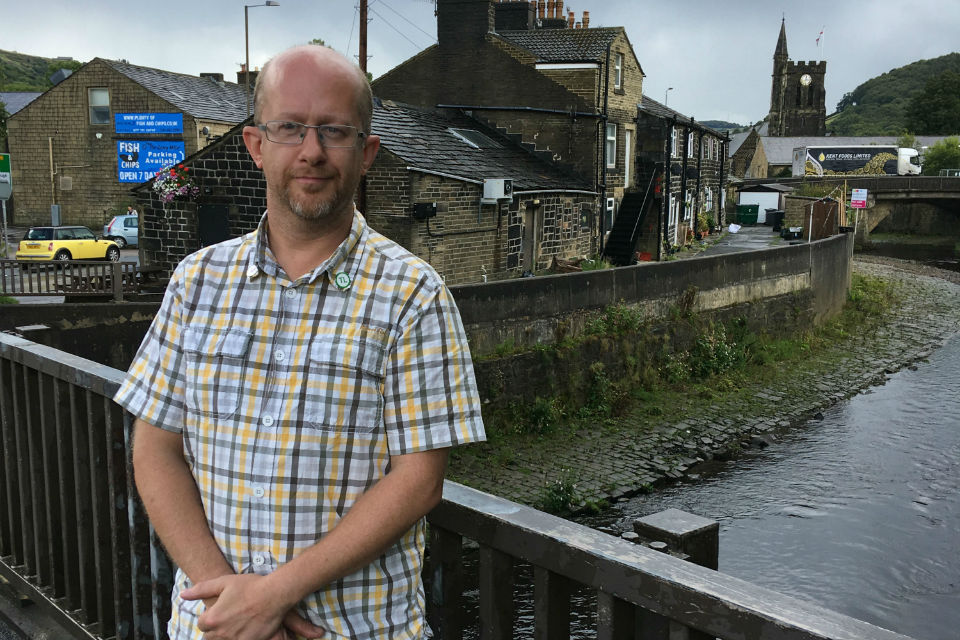 Be prepared for the unexpected is the stark warning from volunteer flood wardens in Calderdale.

Katie Kimber is one of two Environment Agency flood wardens in a newly formed group set up to help protect residents and businesses in Luddenden Foot and they are looking to recruit more this Autumn.

She lives a row of houses at the bottom of the Calder Valley that has a canal running at the front and a river behind them, with their gardens protected by a high wall. Until Boxing Day 2015 they had never been flooded.

I was completely unprepared. I had only just moved to the area and even though the damage I suffered was minimal compared to houses just a stone throw away it made me determined to be ready for the next time.

The mother of two children, aged 12 and 15, now has a flood plan for her own property and has helped set up a flood container for her local community kitted out with sandbags, Floodsax, brushes, spades, gulley cleaners, wheelbarrows, gloves and hand hygiene gel – all the provisions needed for clean-up operations.

Katie has recently attended a sessions with Calder Valley Search and Rescue where the team demonstrated the dangers of water and how to keep safe during a flood event. She has worked with her husband to develop an app called Flood Aware for tracking water levels in the local area. Her role is to work with the Environment Agency to provide them with valuable local knowledge about what is happening on the ground and to support her community in the event of a flood – particularly older and vulnerable people living in the hamlet.

Her advice to all residents is to make sure they have measures in place to protect their own property, sign up for the Environment Agency weather warnings and flood alerts available by email, text and phone, check what the warnings mean and what they should do, keep a close eye on the weather outside and the levels of nearby rivers, particularly during prolonged, heavy rain.

Katie, whose day job is working for Watermark Flood Fund Calderdale, a Community Foundation For Calderdale project which raises money to provide grants in case of future flooding and provides public relations support for Landlines and Watermarks – a unique community arts project with a water theme – said:

Expect the unexpected, have FloodSax or something similar ready under your sink and an emergency bag full of essentials such as a change of clothes, wellies, mobile phone, snacks. Even if you feel silly knock on your neighbour’s door if you have any concerns.

A positive to come out of the recent flooding incident is we have become a very close-knit community, we know and look out for each other.

Karl Boggis, father of two young boys, joined the Mytholmroyd flood group shortly after there were two flood events just two weeks apart in his village in 2012. The group has developed from being a small local pressure group to being the ‘eyes and ears’ of organisations such as the Environment Agency (EA) with 22 active volunteer wardens covering eight zones. The flood wardens receive early warnings of bad weather on the horizon from the EA’s duty officer and one of group’s first tasks is to set up a communications cell in one of their living rooms to provide people of Mytholmroyd with regular updates using their Facebook Group about all flood related activity.

They communicate with each other using radios, visit neighbours to ask them to move any cars at risk and move property upstairs to safety, help evacuate local schools if necessary and will direct traffic to keep it out of flood water.

We know all the hot spots now, which areas are more at risk of flooding so we visit them first to check everything is OK and make them aware of the likelihood of bad weather. We have evacuation plans for some houses, check drains and gullies to make sure they are not blocked. When necessary, we will open up the cabin store in Mytholmroyd for people to collect sandbags.

A lot of our work is through effective communications and making sure people don’t panic. We ask people to stay at home, turn their radios on and if they have elderly neighbours please check on them.

As part of my role I visit people in my local community to introduce myself as their flood warden so they know who to contact if they have a problem. Most of our hard work is actually to help people clear up after a flood.

Karl, a property developer who also works part-time in a utility warehouse distributor, had six of his seven properties badly damaged during the Boxing Day floods with water reaching 10ft in his own house. He said:

Sometimes we do get alerted to bad weather and it doesn’t materialise which does make people complacent. However, the effects of floods are so devastating it is much better to be warned and be safe than sorry.

All flood wardens in Calderdale are being encouraged to take part in an exercise to test their flood plans on the 20th October to coincide with the Upper Calder flood sirens being sounded as part an annual test.

When asked what qualities you need to be a flood warden Karl said:

You need plenty of community spirit, a desire to help and good local knowledge helps.

The local knowledge flood wardens can provide on the ground is invaluable. They complement our work by implementing their community action plans and offer a key point of contact for us to be able to warn and inform people.

These days with climate change our weather is becoming even more unpredictable and so it’s vital for communities at risk to protect themselves by signing up for free flood warnings, and prepare a flood plan.

1 in 6 properties in England are at risk of flooding – that’s almost 5 million people. A big worry is that only about half of the people who are in a flood risk area, actually know about it.

Jon’s advice is to start by taking three simple steps to help protect you, your family and home from the devastating effects flooding:

If you are interested in becoming a flood warden or would like to ask questions, please email the flood resilience team at yorkshiresw.fim@environment-agency.gov.uk.

For the latest information on current flood warnings and the local weather forecast, Calderdale residents can visit the ‘Eye on Calderdale’ website – www.eyeoncalderdale.com

You can also stay up to date by following @EnvAgencyYNE and #floodaware on Twitter.

On Boxing Day 2015 around 370 properties were flooded in Mytholmroyd as extreme rainfall affected the upper Calder Valley. Since then, Environment Agency teams have carried out thousands of inspections, made crucial repairs and constructed temporary defences. A flood action plan for the town was published in May 2016 setting out plans for permanent improvements to flood protection.

Link: Press release: Be prepared and protect your property against risk of flooding
Source: Environment Agency