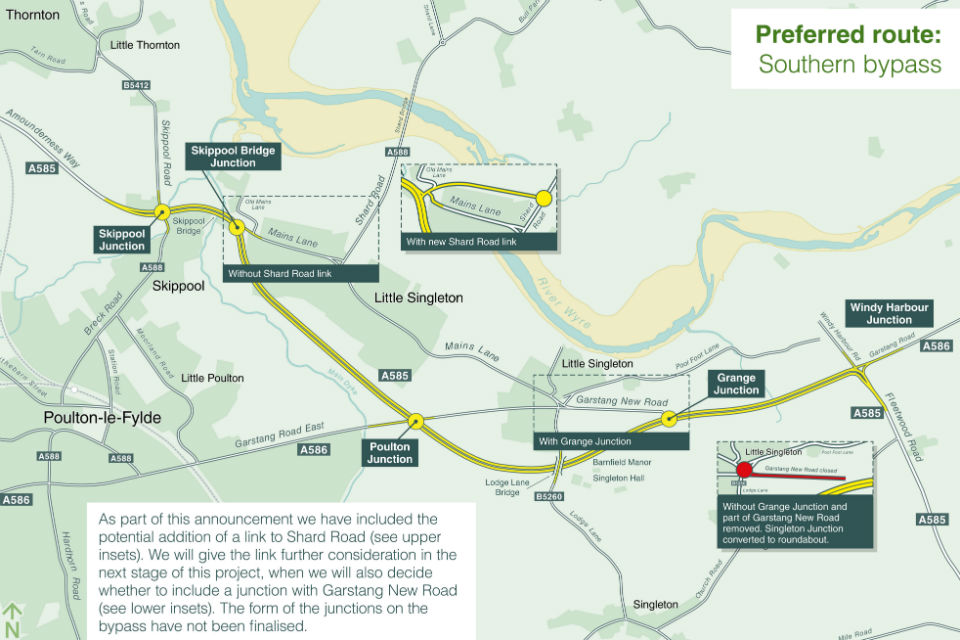 Plans for the new dual carriageway – between Windy Harbour and Skippool – were unveiled today as part of Highways England’s preferred route announcement (PRA) for the project which is part of the Government’s £15 billion Road Investment Strategy (RIS).

The Government is taking major decisions for Britain’s future and delivering the largest roads upgrade in a generation.

The £100 million new bypass along the A585 near Poulton-le-Fylde will boost the regional economy as well as reduce congestion and cut journey times for drivers.

The 2.7 mile Windy Harbour to Skippool section is one of the busiest and most congested along the 11.5 mile road which links Fleetwood to the M55. The Shard and Little Singleton junctions are particular congestion bottlenecks.

The announcement follows last year’s consultation – in which 78 percent of people and both Fylde and Wyre councils backed the bypass option over an alternative to improve the existing single carriageway road.

We are delighted to announce we have decided to take the Southern Bypass option forward. It was comfortably the most popular option in a consultation in which almost everyone agreed that something needs to be done about congestion along this section of the A585.

The new road will help secure and improve opportunities for housing and jobs in this part of Lancashire and contribute to improved connections to the whole of the motorway network.

Work to construct the new road could start in early 2020 but the bypass is subject to a statutory consultation.

Highways England also revealed today it is continuing to consider options for the Garstang New Road junction. Another idea to link the new bypass to Shard Road which was raised by local people during the consultation will also be investigated.

More details of the consultation report and today’s announcement are available on the scheme website.