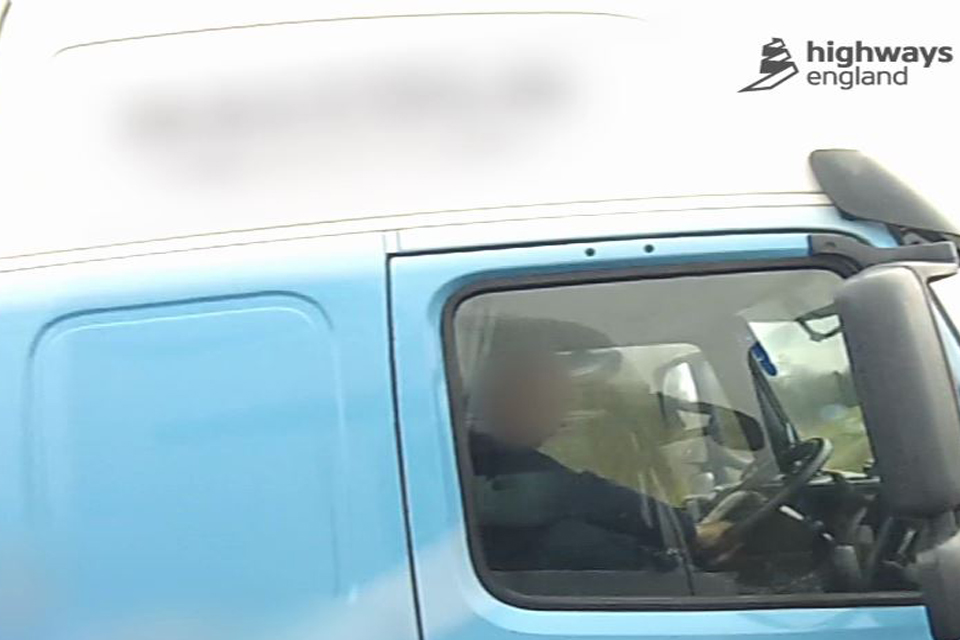 The driver, stopped by Humberside Police, was travelling from the M18 onto the M62 near Goole.

The footage is available to watch at

Another driver pulled over by Devon and Cornwall Police was found to have sent 10 replies to 10 texts within one hour; a driver in Surrey was seen trying to put toothpaste on a toothbrush; and a driver in the East Midlands was spotted steering with his knees while he ate his lunch and used his mobile phone.

The offenders were among more than 4,000 dangerous drivers on England’s roads caught by a single unmarked HGV cab over the past two years.

Latest statistics show that mobile phone use is a factor in an average of two deaths on the roads every month, with 124 people losing their lives over the past 5 years and 521 suffering a serious injury.

The HGV cab, which is funded by Highways England, has been patrolling motorways and major A roads over the past couple of years with the aim of improving road safety.

We’ve found that the vast majority of drivers are sensible behind the wheel but a few have got into bad habits, or are simply ignoring the law and putting themselves and others at risk.

It’s shocking that around two thirds of the drivers that were stopped were using their phones when the statistics show that mobile phone use contributes to two deaths every month on the roads.

The footage of the driver with his foot up on the dashboard is particularly alarming, and I dread to think what would have happened if he had needed to brake suddenly. We will continue to use the cab to tackle deaths and serious injuries and to encourage people to improve how they drive.

The elevated position of the cab allows police officers to film unsafe driving behaviour by pulling up alongside vehicles on motorways and major A roads. Drivers are then pulled over by police cars following behind.

Nearly two thirds of the drivers who were stopped were illegally using a mobile phone while driving, putting themselves and others at risk.

Police forces are committed to keeping our roads safe and partnership with Highways England is absolutely crucial for that, as we can see from the thousands of offences detected by the HGV cab. Together with targeted local action by police officers, this has become an important element of our intelligence-led operations against dangerous driving.

Driving whilst distracted is completely unacceptable and police are also making use of the tougher new penalties to stop this dangerous behaviour by ensuring that offenders face the full weight of law.

People have to think about the consequences of their actions – a moment’s distraction can change innocent lives. It is never a risk worth taking.

In total, 28 police forces have taken part in the HGV cab safety initiative since it began in April 2015, pulling over 4,176 drivers in relation to 5,039 offences.

Earlier this year, the government doubled the penalty for drivers caught using their phones at the wheel. Motorists now receive 6 points on their licence and a £200 fine – up from the previous 3 points and £100 fine.

A new THINK! road safety video was also launched last month, directed by the team behind the video for Pharrell Williams’s hit song Happy, to highlight the dangers of using your phone while driving.

It uses innovative filming, is shot in the style of a music video with an edgy soundtrack from celebrated musician Aphex Twin, and includes numerous pink kittens to highlight how much drivers miss if they are distracted by looking at their handheld phone.

The video is available to watch at

More details about the law on mobile phone use are available the Using mobile phones when driving page.