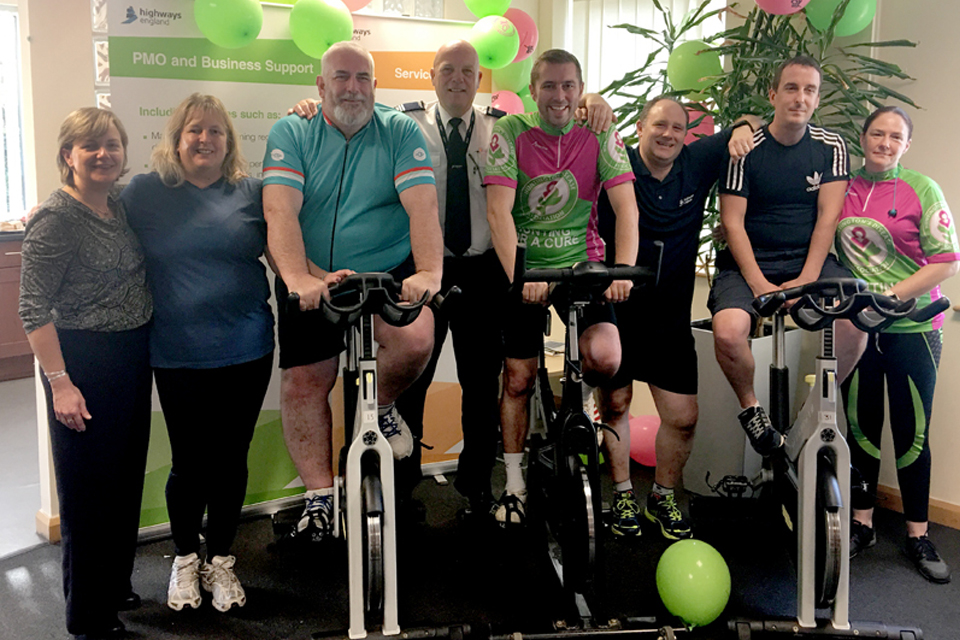 The South West-based traffic officers had set a target of covering 350 miles in a 24-hour spin bike challenge, equivalent to the distance of motorway and major trunk road they patrol in the region – all in aid of the Huntington’s Disease Association.

The team, receiving social media support along the way from the likes of actor and TV presenter Shane Richie and singer Tony Hadley, smashed that target by pedalling their way to a total of 502 miles over 24 hours at the South West Regional Operations Centre at Avonmouth.

Splitting the tasks in shifts, and aided by fellow Highways England staff, they reached their target, and more, between 4pm on Monday 9 October and 4pm on Tuesday 10 October – raising an impressive total of £1,640 in the process.

The Huntington’s Disease Association is a charity close to our hearts and we really wanted to do something to raise awareness of the disease.

We’re delighted to raise the amount we did, and also the support we received from our colleagues in the South West and further afield, and also from the the Bradley Stoke Leisure Centre, who kindly donated two of the bikes.

We tweeted updates over the 24 hours, which created a bit more interest, and it was really nice to get some social media support, particularly the retweets from Shane Richie and Tony Hadley.

Huntington’s Disease is a hereditary disorder of the nervous system that over time causes serious cognitive, emotional and psychological changes. It affects, on average, 12 people in every 100,000 in the UK. For more information go to the Huntington’s Disease Association website.